Klein Sun Gallery is pleased to announce “The Watcher,” a solo exhibition of paintings by Beijing-based artist and animator Zhang Gong, on view from June 30 through August 19, 2016. This marks the artist’s fourth exhibition with the gallery and shows his first new body of work since 2012.

Zhang Gong is best known for his appropriated figurative paintings featuring a coterie of oddball characters. In these paintings, iconic symbols of pop culture – South Park characters, Michael Jackson, Mickey Mouse, Wallace and Gromit – as well as Zhang Gong’s own creations, replace human figures within familiar artworks such as Edward Hopper’s 'Nighthawks,' and George Seurat’s 'Sunday Afternoon on the Island of La Grande Jatte.' With his paintbrush, Zhang Gong rewrites the archaic narrative of art history by rendering these scenes in explicit contemporary light and by amassing these characters in a style reminiscent of an epic, traditional Hollywood set. Zhang Gong’s tendency towards the grand mise-en-scène also translates into his animation work for which he has received several international awards.

In the exhibition “The Watcher,” Zhang Gong presents three new series of paintings revealing the artist’s maturation in themes of abstraction.

The “Dissolve the Night” series conflates Zhang Gong’s meticulous character drawing with the universe’s structures of ever-shifting, ever-expanding atoms. These canvasses present swirls of kinetic objects in the dozens: planes, ships and flying ‘heroes’ such as Astro Boy, Mike Wazowski (Monsters Inc.), Jack Skellington (The Nightmare Before Christmas), as well as Zhang Gong’s frequently appearing panda, a figure which represents the human self.

The panda also makes an appearance in another series of the exhibition, “Flying to the Void.” Here, the artist has painted minimalist shapes in the form of a crossroad and has placed the panda at the center. Winged and suspended in the paintings, the panda is faced with a choice in direction. He is equipped to fly but does not understand his own path yet. At the same time, the crossroads, which are painted in an array of luminous hues, appear like rays of light and charge the paintings with a spiritual vigor.

Finally, “The Watcher” series presents quiet narratives in an imagined forest, thick with trees set apart in a formulaic pattern. In the spaces between the trunks of these trees, characters act out mini scenes as if each grid were an individual stage; these interactions appear to have no correlation to one another, yet are connected by the larger enclosure of this strange forest.  Zhang Gong's questions about society ring clearest here, in his studies of these beings that move as if unseen in these shadowed lands. The artist asks: who are these people guarding and protecting? And who is watching over them? 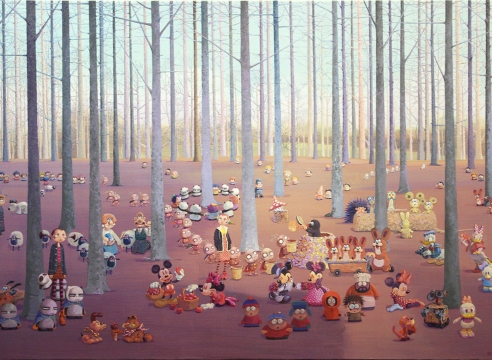 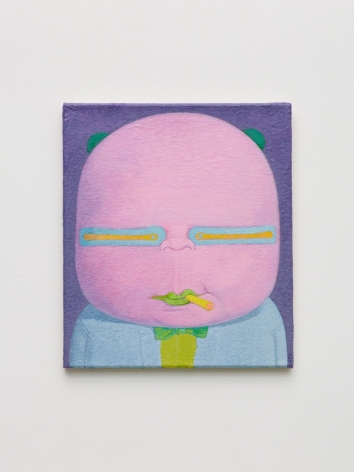 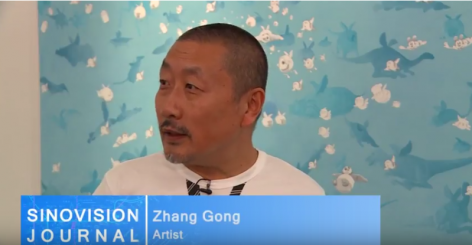