Klein Sun Gallery is pleased to announce “The Fat Years,” a solo exhibition of paintings by Chen Wenbo from October 14 through November 14, 2015.

Irregular, fragmented and distorted, the hyper-realistic subjects in Chen Wenbo’s “Broken” paintings convey satirical messages, which have been inspired by the “carnivalesque” – the English translation of the term coined by Russian critic Mikhail Bakhtin to describe a social landscape mired in revelry.  Chen paints everyday objects as shiny, glossy beacons of desire.  Drawing from the theory of “fat years,” an illusion of accelerated economic growth manipulated by higher powers, Chen is both a critic and participator in this bubble of celebration.  The audience too, cannot escape this dichotomy: the installed canvases are sliced and carved into silvers, revealing just enough of an illusion to entice; the exhibition walls are fully painted in vivid color.

A prominent painter in the figurative movement, Chen is separate from his contemporaries in his stylistic observations.  While others air their views through zeitgeist agitprop styles, Chen always chooses to disseminate his socio-political stances through subversion.  He paints the mundane as fantastical and brilliant in soft flourescents, as if though a looking glass.  His attention is not limited to China; skepticism over market crashes in New York in the late 2000s triggered the artist to consider the inevitable instabilities across the Western and Eastern megacities, and to look at who is presenting the facts and for what purpose. 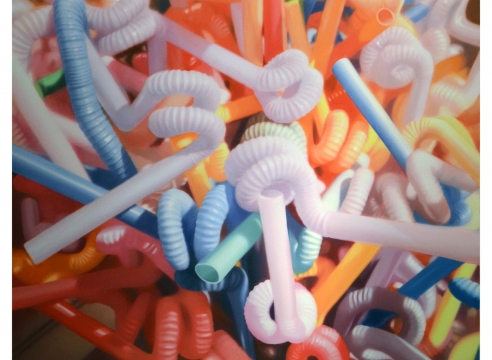