Klein Sun Gallery is pleased to announce "Void and Substance," the first solo exhibition in New York for the renowned Chinese artist, Li Hui. Famous for emotionally intense sculptures that challenge human nature, evolution, and technology, Li Hui’s work has become the subject of discussion around the world. This new body of work continues to express the artist’s poignant and powerful opinions on time, space, speed, and humanity.

God is Laughing, an allusion to Auguste Rodin’s The Thinker, highlights the absurdity of existential thought. Comprised of thousands of glowing LED lights, Li Hui’s looming ape gazes down on mankind just as mankind typically gazes down on an ape. It questions the accepted pyramid of intelligence and sarcastically challenges our attempt to understand the meaning of existence.

Similarly, Captured Rhino also calls human intelligence into question. As the outline of a Rhino forcefully pulls against its constraints, the artist comments on mother nature’s often unanticipated strength and humanity’s failure to accept this dominance. At the same time, however, the sickle, which holds the massive rhino in place, illustrates the power of human ingenuity.

In Li Hui’s eyes, the human ability to think and create is an incredible, but often misused power. His LED and acrylic work, Blooming, conveys this feeling beautifully. The illuminated mushroom cloud contained within the work blooms open like a delicate flower, paying homage to the incredible advance made when humans split the atom. The sheer amount of energy created by this reaction can solve our energy crisis, yet instead, it has been harnessed as a terrifying weapon. The contemplative beauty of Blooming wonderfully captures Li Hui’s thoughts on human intelligence.

Despite this distinctly pessimistic meditation, Li Hui believes that technological development is a natural process and simply the next step on the path to evolution. His work Atlantis, which contains a glowing lightening bolt within a decaying robot, highlights that energy and electricity are naturally occurring phenomenon. While technology is not an unnatural phenomenon, it is a natural evolution in human development.

Li Hui was born in Beijing, China in 1977, and earned his Bachelor of Fine Arts from the Central Academy of Fine Arts in Beijing.  His work has been exhibited in museum shows around the world including recent solo exhibitions “Transition,” Mannheimer Kunstverein, Mannheim, Germany (2010); “Who’s Afraid of Red, Amber and Green?” Museum Kunstlich in de Kunst, Eindhoven, The Netherlands (2010); “Reality Impalpable,” Museum of Contemporary Art, Taipei, Taiwan (2011) and “V,” Ullens Center for Contemporary Art, Beijing, China (2011).

Void and Substance is presented in collaboration with Zadok Gallery and will be on view from March 8th through April 21st, 2013.  The opening reception will be on Friday, March 8th from 6-8PM.  For further information, please contact the gallery at info@kleinsungallery.com or at +1 (212) 255-4388. 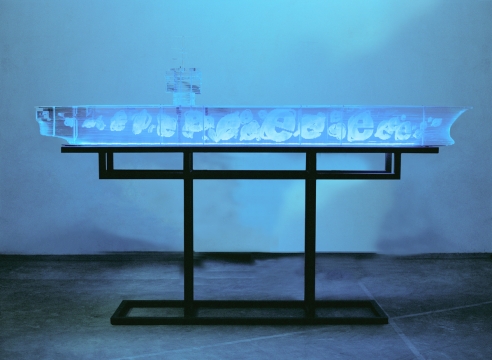