Chinese contemporary art has attracted worldwide attention largely because of several artists' highly creative reflections on the transformation of their landscape and the individuals who seem to be lost in transition. The people have been displaced from the traditional communal Chinese living quarters, in which residents shared a courtyard, to anonymous high- rises where they are suddenly alone and isolated from their community. The artists in this exhibition reflect the emotional trauma associated with this bewildering transition occurring at inhuman speeds. While continuing to deal with the residue of the Cultural Revolution, artists are faced with the challenge of expression amid constant demolition and construction not only of buildings, but of society at large.

Photography in China has become an important tool in coming to terms with the dynamic between the individual and the urban environment. Artists often use their own bodies in performances which subsequently are translated into photographs. China has a social structure built on control and suppression that has too often denied the right to self-expression. Using the body in performance art is a way to reclaim the power and assert individuality, while creating a bridge between the self and the larger society. In the West, we take the perspective of the individual for granted, but in China that perspective is considered objectionable, if not forbidden.

This exhibition, while focusing on photography, also includes important prints, sculpture, and painting. Some of the artists focus on contrasting traditional and modern values. Two of China's most prominent artists, Wang Guangyi and Zhang Xiaogang, look back critically at the Cultural Revolution from a modern perspective. Huang Yan and Liu Liguo create work that integrates traditional art forms with modern subjects. Sui Jianguo presents an enlarged bronze toy dinosaur as a kind of metaphor for China.
Other artists such as Zhang Hui, Zhang Peng and Liu Ye turn to youth, naïveté and vulnerability to create breathtaking imagery relating to the suppressed, yet ubiquitous, emotions of loss in China - in particular, the loss of innocence.

Liu Jin, another photographer, presents a new series of works titled Wounded Angel depicting the artist wearing angel wings amid construction sites and debris in Beijing. Li Wei and Liu Bolin use photography to comment on the dynamic between the Beijing environment and the individual. Zhang Dali presents work from two important series, Dialogue and Demolition, in which Zhang initiated a much needed conversation regarding the transformation of Beijing and the silence of its residents. All of the artists present dynamic work that captures the tensions existing in today's China 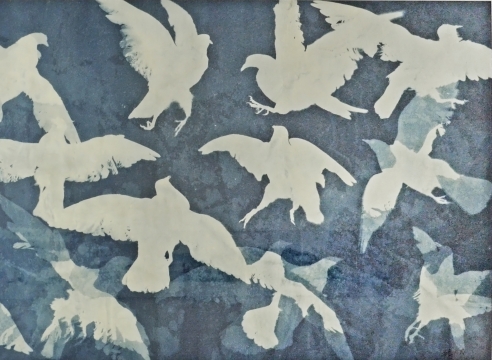 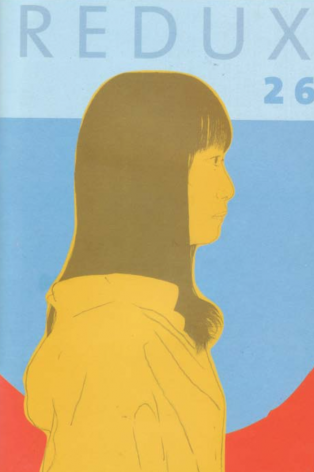 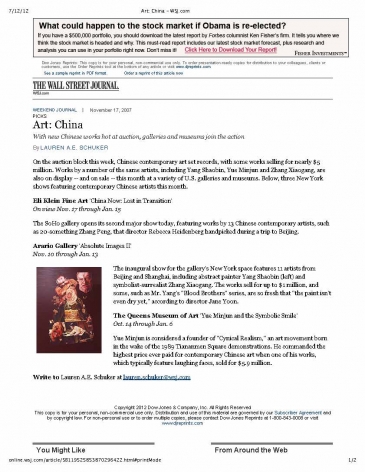