Still of projected installation Projection A, 2016 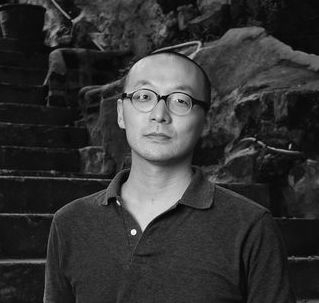 Lam Tung-pang was born in Hong Kong in 1978. He holds a BFA from the Chinese University of Hong Kong (2002) and an MFA from Central Saint Martins in London, England (2004).

Lam Tung-pang is a founding member of the Fotanian art movement in Hong Kong. During his studies at the Chinese University, Lam rented a unit in the district of Fo Tan, marking the germination of a nascent arts community. Along with his contemporaries Chow Chun-fai and Wilson Shieh, Lam produces his work in a gritty industrial space that faces Hong Kong’s green mountains, signifying both the city’s heterogeneous environment and the artist’s observations of his surroundings.

Lam Tung-pang is primarily known for his large-scale paintings and drawings on plywood. Staining and treating the wood veneers first, Lam creates monumental pictures that reflect on the societies we live in – for example, the image of a polar bear often appears as a metaphor for beings trapped by external influences, mostly the consequences of human action. He continues these reflections in his other mixed media works, including video, sound art and site-specific installations. As a leading contemporary Hong Kong artist, Lam’s work has been recognized by institutions such as the Tate Modern in London (where he presented a performance in 2010) and the Royal College of Art. He is the recipient of the Best Artist category from the Hong Kong Arts Development Awards (2013), the Hong Kong Contemporary Art Biennial Award (2009) and the Sovereign Asian Art Prize (2006).