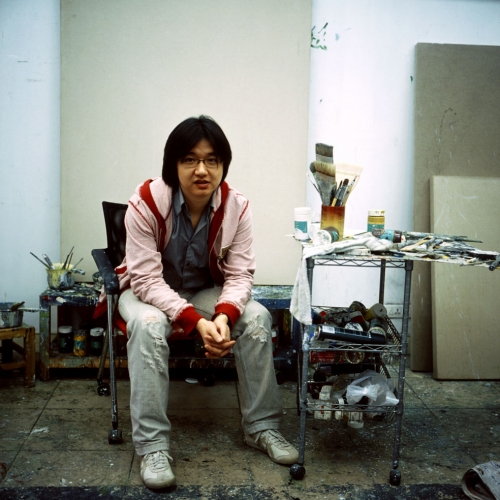 Gong Jian was born in 1978 in Hubei Province, China and graduated from Hubei Institute of Fine Arts in 2001. Jian has a diverse painting practice, from the original "bad painting" style to the later conceptualist abstraction attempts, in order to find inspirations for a series of fundamental problems in painting. Unlike those artists who tend to keep a sustained style in the art market, Jian has always been exploring new possibilities and putting his exploration into the research of the history of painting. In addition to that, he has also tried to bring historical reflections and geopolitical observations into painting practice in recent years.

Images of various incidents are the key resources and motivations in Gong Jian's recent paintings, such as the Hong Kong’s ruthless gangster—Yip Kai Foon, Iran ’s Queen—Farah Pahlavi, the first elected Prime Minister of the Pahlavi dynasty—Mossadegh, the Romanian Revolution in the film Videogramme einer Revolution by Harun Farocki and much more. In the meantime, he also actively makes references to the art history template in his painting, applying the technique languages and image materials from artists like Bruegel, Manet, Cezanne, Baselitz, Hockney, Lauder Dufy, Picasso, Kia, and Matthew Wong. Gong Jian found a revolutionary stitching between those two elements and was able to find or separate a new self, which Hegel's called “the second self” in The Phenomenology of Spirit. Unlike the "first self" (the personality) and the "third self" (the conscience), the "second self" refers to the spiritual stage of self-alienation, which is the externalization of self-consciousness, while the identity experience of the objectified world turning back to self-consciousness. For Gong Jian, those images and classic texts in the art history are not only the objects of his self-conscious projection, but they also return to his self-consciousness. The revolution of his self-conscious which consists of the projection and its return constitutes his “Second Self”. The new work of the same name on display is undoubtedly the best interpretation of this series of new works.